The cycling and walking revolution

“Behold! The cycling revolution is finally coming!” Twittersphere has exploded with the news that the UK, like many other cities across the globe, to promote walking and cycling as an alternative transport strategy.

In preparing the post-Covid-19 world, when some normal service can be assumed, the government is anticipating the population hesitant to use public transport to travel to work. To counter this, Grant Sharpe, the Transport Sectary, has announced a £2 Billions package to promote cycling and walking as an alternative mode of transport to discourage us from jumping into our cars and choke our roads and deteriorate the air quality that we have been taking for granted.

This is much-needed welcome news for the promotion of sustainable transport, for cycling campaigners and not least, the general public who may be anxious on how they will be able to safely get to work in the coming months.

We have seen images/videos in Milan, Paris, Portland, Oregon and in particular, New York where streets being closed for pedestrians/cyclists and there are some early indications on what this new infrastructure in London will look like, but what I am more interested in, is how we can sustain the momentum after the initial euphoria?

It is great we can finally reclaim the roadway back as public realm, with dedicated cycleway and wider pavement for pedestrians, but we mustn’t be complacent or reclaiming street blindly without a longer-term strategy. After the initial surge in usage, I suspect it will plateau or a drop in users for different reasons. As Urbanists and Placemakers, we should be thinking about how we can take advantage of this golden opportunity of a generation and make this beyond a network and more of a series of places. 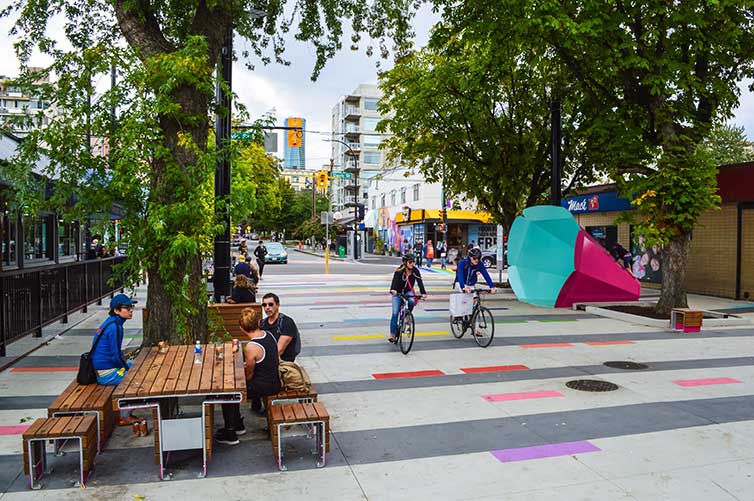 Let’s be Simple and Tactical?

Rather than a grand architectural pipedream, with location-specific solutions down to the colours and materials, I believe we should set out examples with simple rules to inspire local people to take ownership of their neighbourhood. It will be the biggest neighbourhood tactical urbanism exercise in the country. Instead of a top-down government approach, which will end up with no more than paint on the street and a few shrubbery plants if you are lucky. Why not inspire the local neighbourhood to take ownership of their public realm, set out simple rules such as minimum wide of the cycle lane, markings and signage and leave the rest to the community?

If the local people have been given the opportunity, most people will take pride in smarting up their streets with innovative design, it could even spark some friendly competition between neighbourhoods for the best design. Imagine the possibility of a series of different design that reflects different neighbourhoods? It could be the best modern examples of mind maps as proposed by Kevin Lynch back in the 1960s, wouldn’t that be a nice urban design revolution as a result of this painful pandemic?

One thought on “How Bold should we go?”